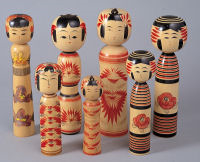 Kokeshi, a traditional wooden toy that resembles a child wearing a kimono, is a special product of Tohoku. It is often said that a kokeshi’s face mirrors its craftman’s. 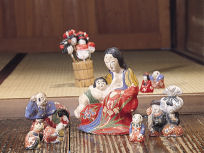 Hanamaki Dolls, along with Sendai’s Tsutsumi and Yonezawa’s Sagara, are counted as one of the three major doll-types of Tohoku. Although production ceased for a time because of a lack of craftsmen, a local toy producer and the city cooperated to revive the traditional doll-making techniques.

This statue, known as “Gongen San”, is displayed in homes in the hope that wishes will be granted. They are carved from Ohasama-grown wood using only one chisel. The chisel is called a “Tsuki Nomi.”

These Hayachine Kagura Dance masks are considered to be important national cultural assets made as part of a tradition that spans more than 500 years into the past. 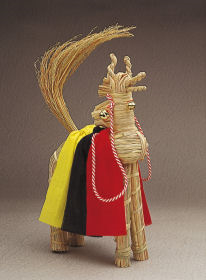 This horse-shaped straw doll from the Enmanji Kannon Temple is thought to promote matchmaking and bountiful harvests, among other things. People used to secretly offer the dolls at the temple and when their wishes came true, dressed the doll in beautiful clothes and prayed to the Kannon Buddha(the Lord of Compassion- Avalokitesvara in Sanskrit). 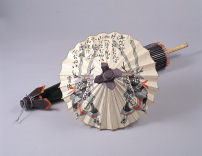 The sole-surviving umbrella maker in Iwate started production in 1912. This Hanamaki-made umbrella has a 200-year history and is made from Iwate bamboo and paper from the famous brands, Mino and Karasuyama. 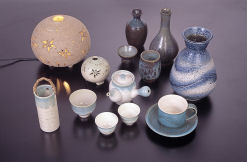 Dai Pottery is a rare type of stoneware in Tohoku. Made of Mt. Manju stone, it has a sturdy folk and blue rice-based glaze. Mitsuro Sugimura, a grandson of the originator of Dai Pottery, has founded a new called Seyama Pottery. Seyama Pottery includes Kushime Hamon, a unique pattern made by a bamboo spatula, and the Galaxy Series, which uses motifs from Kenji Miyazawa’s “Night on the Milky Way Train”.
Besides Dai and Seyama pottery, Kajicho was the official pottery of the Nambu clan and Hayachine Pottery is well-known for its lampshades and finely decorated lanterns.

Enjoy the feeling of handmade accessories made from mink, fox and rabbit.

Towa’s homespun cloth is internationally famous as it was chosen by Chanel for its Paris Collection. Using techniques originated by farmers in Scotland, they dye wool directly and spin and weave it by hand. Its light, warm and wrinkle-resistant performance is suited to producing garments such as suits, ties and shawls. Towa holds 80% of Japan’s market share in homespun products.

You can see various dyed products in Hanamaki, from those made with traditional indigo dyes, to unique items made using motifs from Kenji’s literature.