To the vast universe of Kenji’s dreams

Kenji Miyazawa was not only the author of wonderful stories such as “Night on the Milky Way Train” and “The Restaurant of Many Orders”, but also a farmer who learned agronomy and advised other local farmers. Kenji also inspired through music.
Hanamaki is where he was born and raised, and he loved it very much. There are many buildings and places where people can trace his life. Many fans and tourists visit these sites to commemorate him or get to know him.
We would like you to explore the hometown of the internationally acclaimed author, Kenji Miyazawa.

This fantastic 10m-high, 80m-wide mural, located only one minute from Hanamaki Station, was inspired by Kenji’s “Night on the Milky Way Train.” Painted in Lumilite Color, the mural glows exquisitely under ultraviolet light at night, yet appears as only a white outline during the day. Created in August 1994, it is now a popular tourist spot.

Kenji named a point on the western riverbank of the Kitakami River, about 2km east of Hanamaki Station, the “English Coast” as he adored England. While a teacher at an agricultural school, he often took his students there and had them do earth science field studies. Hanamaki City Hall Ph.0198-24-2111 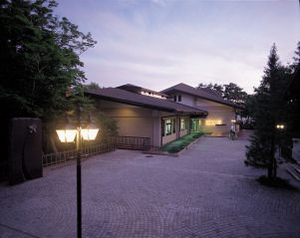 This museum introduces Kenji’s accomplishments in literature, education, agriculture and science with personal belongings, originals writings, videos, slides and books. More than 200,000 people visit each year to learn about the life and work of this remarkable man. We recommend you experience Kenji’s interesting imaginary world “Ihatov.” Ph.0198-31-2319 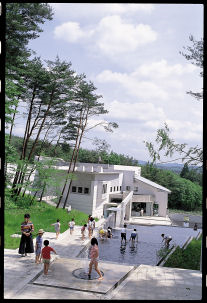 This museum collects books, research bulletins, magazines and art work about Kenji and is the headquarters of the Miyazawa Kenji Association, Ihatov Center, an association for researchers and fans of Kenji. Books, picture books, CDs and videotapes of his work are available. The museum organizes lectures and workshops about him, and also holds concerts during the Kenji Festival and the Kenji Birthday Festival. Ph.0198-31-2116 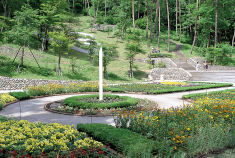 These south-facing flowerbeds, named after one of Kenji’s fantastic stories, “Polan Square”, have a wonderful, quiet atmosphere. You can spend a relaxing time strolling or resting among the re-created flowerbeds and floral clock. Miyazawa Kenji Memorial Museum Ph.0198-31-2319

You will be amazed when you come face-to-face with Kenji’s world at the modern fantasy lands, Dowa Mura and Kenji’s School. At Kenji’s School, movies, sound effects and displays in the five differently-themed rooms usher you into the fantastic world of his “imagery sketches.” Ph.0198-31-2211

Born in Hanamaki on August 27th, 1896.
Became a teacher at Hanamaki Agricultural School in 1923.
Published a book of poetry, “Haru to Shura”, and a collection of children’s tales, “The Restaurant of Many Orders”, in 1924.
Founded Rasuchijin Association in 1926.
Passed away on September 21st, 1933.
His grave is at Shinshoji Temple, Hanamaki.

Kenji was a great man of Hanamaki who developed his talent while young,unfortunately meeting a very early end.
While teaching at Hanamaki Agricultural School, he wrote many poems and fairy tales. When he resigned from the school at the age of 30, he founded the Rasuchijin Association and began solitary life. Though he started teaching agronomy to young local farmers there, he fell sick twice after that and was called to his eternal rest on September 21st, 1933. He was 37 years old.
He is well-known for his poems and fairy tales. As well as being a teacher and farmer, he also displayed his talents in fields such as astronomy, meteorology, geography, history, philosophy, religion, chemistry, horticulture, biology, fine art and music.
There are many sites in Hanamaki where visitors can trace his life.
Why don’t you visit “Ihatov”, Hanamaki, which Kenji named out of affection for the land of his birth? 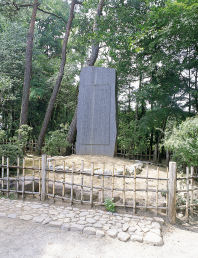