Festivals sweep over Hanamaki in a wave of excitement. The otherwise quiet town becomes a riot of noise and color. The anticipation begins long before the festivals themselves and decorations are strung up throughout the city. Beautiful hand-made floats adorned with lights and accompanied by traditional music strike a contrast with their slow pace to the passionate energy and tension of the mikoshi (portable shrines) that charge down the streets in a striking wave of energy and noise. It’s easy to get carried away with the excitement of Hanamaki’s festivals. 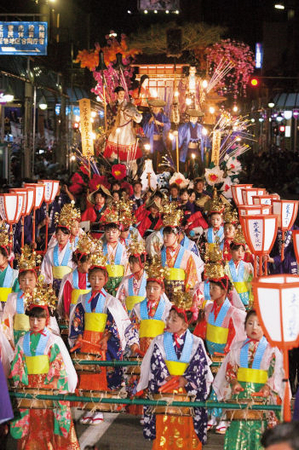 The Hanamaki Festival has more than four centuries of history. See the passion of Hanamaki’s people in their gorgeous floats and parades of sometimes more than 150 mikoshi (portable shrines), traditional local performing arts like Kagura and the Deer Dance, and lively music. 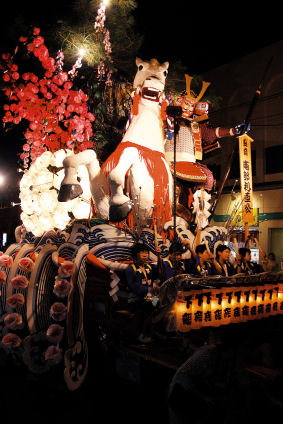 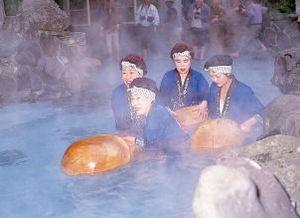 The phallic deity Konsei, said to aid in matchmaking, fertility, and safe birth, is paraded down from his mountain shrine to Osawa Hot Springs. There, a taiko group performs traditional drumming. During this performance a pair of demons with phallic drumsticks not only take part in the drumming but also leap into the audience, thrusting their anatomically carved drumsticks into the faces of spectators, who are expected to stroke them for a blessing. Later, dignitaries from the city including the mayor, bow and stroke the phallus reverently in preparation forthe god’syearly bath in the famous outdoor hot spring bath beside the river. The climax occurs when women hoping to benefit from the fertility power of the god take turns mounting the enormous phallus and take brief rides around the bath.

(end of February – beginning of March) 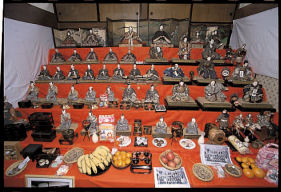 The number of highly treasured Hina dolls from the Edo era still kept by Ohasama people hints at the town’s prosperity as an important stopover between Morioka and Tono in the old days. They are displayed in shops and houses, attracting many tourists. 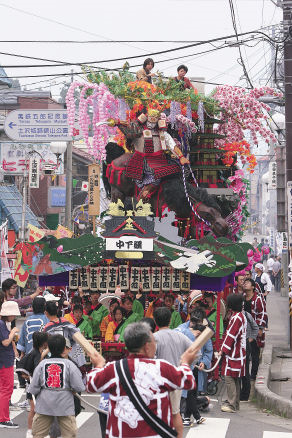 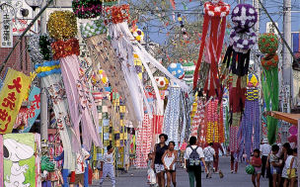 In this Tanabata festival, started in the Taisho period, colorful streamers adorn the main street. A local food event is also held. 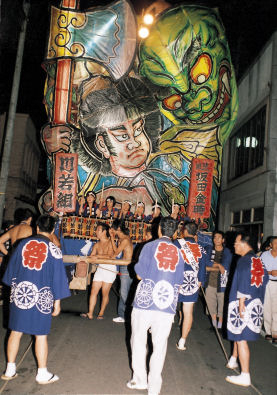 This festival originated as a memorial service for the people who had died in severe famines about 200 years ago. Floats of gigantic lanterns, illustrated with warriors and Buddhist figures, are paraded on the main street. 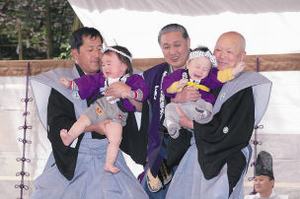 (From the end of April or the beginning of May; in the middle of September)
This is the national tournament version of the local shrine ritual held by Narushima Mikumano Shrine. Two foremen each hold a 6 – 18 month-old baby, yell “Yo, Yo”, and turn their upper bodies so that the babies face each other. The baby who cries first is the loser. Babies from all over Japan cry loudly and the sound echoes over the Bishamon Statue site (see page 16). 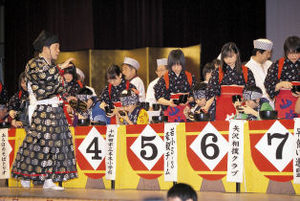 The contestants compete to see how many bowls of bite-sized buckwheat noodles they can inhale in three to five minutes. We are waiting for your participation! 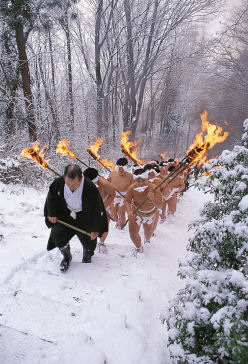 In this festival, originated in 1865, half-naked men, praying for the good health and welfare of their household, carry torches in a long march up to a mountain top shrine. At the climax of the festival, they engage in a sort of battle royale for the somin bag in front of the shrine. The first one who manages to break free of the group with the bag and crosses the shrine gate at the bottom is the winner. Participants come from all over Japan to compete. Koshio Somin Festival Committee Ph.0198-31-2754 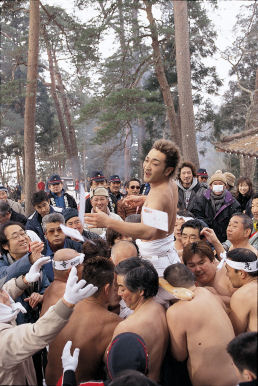 Half-naked men compete to get a hemp sack containing 365 wooden charms for good health (somin bag). It is believed that whoever gets it will find happiness. This festival has been held for more than 800 years. Koshoji Temple Ph.0198-47-2230 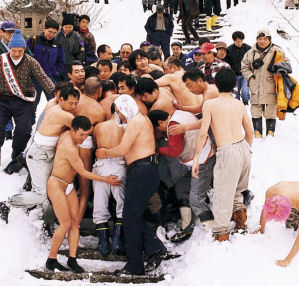 In a ritual to pray for good health and bumper crops, local men scramble for a somin bag. The men wrestle for the bag as the group moves towards the shrine gate. Whoever is holding the mouth of the bag at the gate will receive itsbenefits of health and happiness.