An important national cultural asset with more than 500 years of history.

Before Nogaku (Noh) theatre was completely formed, the style and spirit of Hayachine Kagura Dance was handed down from teacher to student. The two schools of Hayachine Kagura Dance, Otsugunai and Take, continue to delight audiences.
Hayachine Kagura Dance is the collective term for Otsugunai Kagura and Take Kagura, and was recognized as an important national cultural asset in 1976. It is said to have more than 500 years of history. Although both schools have about 40 styles of dances with the same or similar titles, their dances are utterly different. Otsugunai is based on seven beats and its fluent and delicate style suits female roles. On the other hand, Take is based on five beats and its dynamic style suits male roles. Their Mountain God masks are also different, as the mouth for Otsugunai is open and the one for Take is closed. In spite of these differences, people often say the schools are inextricably linked.

This kagura is dedicated to the Otsugunai Shrine. There was a book published about this dance in 1488. 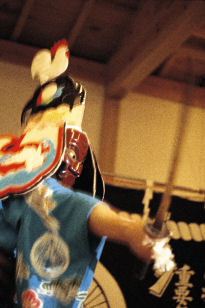 This style of kagura is dedicated to the Hayachine Shrine, which has a gongen sama mask (lion mask) made in 1595.

Kagura dance is performed by the light of braziers until late on the eve of the festival. On the day of the festival, the shrine’s mikoshi (portable shrine) leads dozens of gongen sama (dancers with lion masks) and shingaku (played by children, portraying the gods dancing in a line), and they march around the Take community. 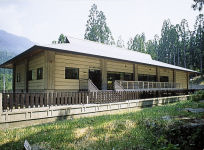 The deer dance while beating drums. The Deer Dance is aprefectural cultural asset. 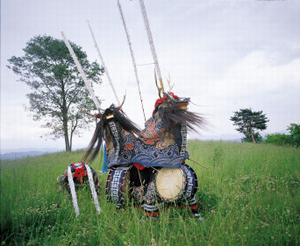 The dynamic Deer Dance is widely recognized as the representative local performing art of Iwate. Enjoy the beat of drums and the dramatic action of the white bamboo horns, sasara.
The Deer Dance, performed to pray for peace and drive away evil spirits, is registered as a prefectural cultural asset. Each performer dances while singing and beating a drum. You can see about 30 teams dance during the Hanamaki Festival. The following is a poem by Kenji Miyazawa, entitled “Plateau”:
It could be the ocean, I thought,
but it was shining, green hills.
Ah,
My hair blowing in the wind
looks like the deer dance ! 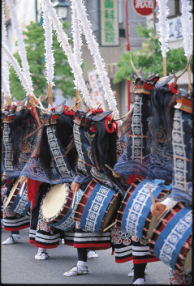 Many deer dance teams belong to the Kasuga school, which is a branch of Kasuga Ochiai Deer Dance. They have a quiet and calm dancing style. 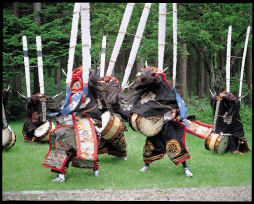 The Kanazu school, based in Oshu City (old Esashi City), has a dynamic dancing style compared to the Kasuga school. Hanamaki has its own Kanatsu team.

Where to see the Deer Dance