A treasure trove of alpine plants, one of the “100 Attractive Mountains of Japan.”

Mt. Hayachine – mountain of the gods 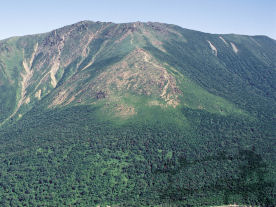 The Mt. Hayachine area consists of several peaks, notably its 1917m-high summit, Kengamine to the east and Nakadake and Keitosan to the west, extending over more than 10 kilometers. Mt. Hayachine is the highest peak in the Kitakami mountain range, and is counted in the book, “One Hundred Mountains in Japan”, by Fukada Kyuya (1903-1971).
The neighbors of the mountain, as well as the lord of the Morioka domain, felt deep reverence for it as a site of ancient mountain worship.
The appeal of this mountain lies in its various kinds of alpine flora, starting with Hayachine Usu Yuki So. Hikers have always been fascinated by this beautiful flora growing and blooming in such a harsh natural environment.
The area of this precious mountain and Mt. Yakushidake, a mountain south of Hayachine, is designated as a special natural treasure and a quasi-national park, and great care is taken to conserve its environment.
Although Hayachine can be climbed in a relatively short time, careful preparations and appropriate equipment are necessary. Sudden changes in the weather can quickly make conditions dangerous. 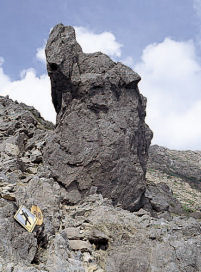 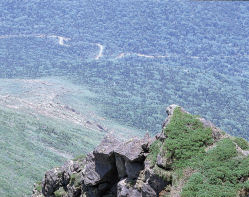 The view from the top of the mountain is magnificent: a field of alpine flowers, a dense forest below, and the ridge lines of Mt. Yakushidake to the south. Around the summit, there are many oddly-shaped rocks which have become objects of religious faith. “Buchi Ishi,” located in the middle of the Kawara no Bo trail (see the picture above), has a folk story about a tengu (long-nosed goblin) that hit his head on this rock. 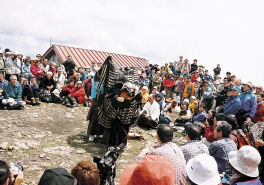 The second Sunday in June is the opening day of the hiking season at Mt. Hayachine. Many hikers from Iwate and other prefectures gather at the top of the mountain, which holds the innermost sanctuary of Hayachine Shrine. Surrounded by hikers, Shinto priests pray for safe hiking and the sacred local dance, Hayachine Take Kagura, is performed in dedication to the god of the shrine. 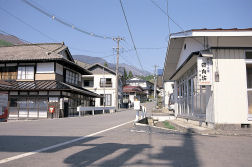 Along the base of Hayachine Mountain, near the famous Hayachine Shrine, there are a cluster of guest houses known as the Takejuku. These guest houses were originally for Buddhist pilgrims visiting the nearby temple, and thus the name of each guest house ends with the Buddhist suffix of –bo, which is traditionally affixed to Buddhist lodging. Three of the Takejuku are still open as lodging for guests. 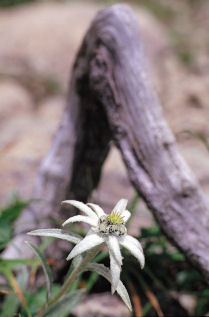 The symbolic alpine plant of Hayachine is an endemic species. It grows in the middle of the alpine belt and blooms between July and August. Named “Usu (thin) Yuki (snow) So (grass; plant)” as its leaves are covered by very fine white hairs that look like a thin layer of snow.

This beautiful flower blooms between July and August and rarely in September. It grows in the grass and gravel all over the alpine belt. It grows to about 20cm high and has “Tora no O (tiger tail)”-shaped pink flowers. ( An endemic species of Hayachine.) 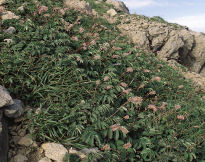 This flower blooms between July and August. It has close-set, red-purple flowers that look like an ear of wheat and grows in the grass and rocky slopes on the southern side of the alpine belt. Named “Touchi” because the shape of its flowers are similar to touchi, a braided rope that was imported from China in ancient times.
(An endemic species of Hayachine.)

The hime kozakura blooms in June. It freckles the grass on the southern slope of the alpine belt. Hime means princess, ko means small, and sakura of course is the Japanese word for cherry blossom. The flower reflects this name. It has white flowers with five petals and a diameter of about 1cm. It is named “Sakura” because its flowers are similar to cherry blossoms. (An endemic species of the Kitakami mountain range.)

Take ->2 hrs ->Kawara no Bo ->50 min ->Odagoe ->2.5 hrs ->summit ->1.5 hrs ->40 min ->Kawara no Bo ->1.5 hrs ->Take
This is the most popular trail. The alpine belt is reached from about the 10% point of the trail allowing hikers to enjoy a lot of alpine flora in the summer.
Besides the trails above, there are several others:
Keitosan trail – you have to walk through some dwarf bamboo brush.
Traverse trail – the trail through Mt. Hayachine, Mt. Nakadake and Mt. Keitosan is suited for hardy hikers
To prevent traffic jams around Mt. Hayachine, the local government stops traffic at the bottom of the mountain on Saturdays, Sundays and national holidays between the middle of June and the beginning of August. Please check out the bus system as you need to ride a bus to reach the trailheads on the days above.